Tuesday, August 25, 2020
https://www.ausa.org/news/groundbreaking-civil-war-doctor-showcased
Some of Walker's possessions are in the National Museum of Health and Medicine
Posted by Mike Rhode at 9:34 PM No comments:

Responding to the Washington Post's mistaken criticism of Hammond

In this article,"The stench of colonialism mars these bird names. They must be changed" by Gabriel Foley, Jordan Rutter, published online August 4, 2020, the authors write,

Behind the Scenes: an Archivist Draws on Myriad Experiences

Below is an interview with Kristen Sosinski, Archivist in the Prints & Photographs Division at the Library of Congress.

https://blogs.loc.gov/picturethis/2020/07/behind-the-scenes-an-archivist-draws-on-myriad-experiences/
Posted by Mike Rhode at 8:45 PM No comments:

Through his eyes: Green Valley man saw WWII as few did

Tuberculosis in the African-American community photos at Library of Congress

July 8, 2020 by Ellen Terrell
https://blogs.loc.gov/inside_adams/2020/07/black-angels/
One often doesn't think of LOC as a resource in Washington, since the National Library of Medicine is here.
Posted by Mike Rhode at 4:32 PM No comments: 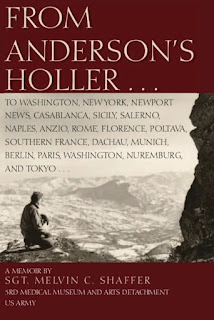 A memoir of growing up in the hills of West Virginia and suddenly becoming a World War II medical photographer, with a clearance to go where others could not.

In his first memoir, pioneering medical educator and Army Sergeant (ret.) Melvin C. Shaffer recalls his upbringing in rural West Virginia, his efforts to escape the narrow life of his peers, and his service in World War II. Foreshadowing his global wanderings, Shaffer’s first memory is of his father receiving a telephone call on his family’s wall-mounted crank telephone, announcing Lindbergh’s trans-Atlantic flight arriving in Paris. As a boy, he developed a dual love of travel and photography. When World War II called, these passions fueled his success as a photographer in the Army’s 3rd Medical Museum and Arts Detachment (MAMAS). Trained and equipped as a medic, he also carried a full photography kit on assignments given him by the Army Medical Museum in Washington to document medicine and surgery – both advances and problems. First sent to North Africa, his own resourcefulness got him to wide-flung duty stations: Sicily, Salerno, Naples, Anzio, Rome, Florence, Poltava, Southern France, Dachau, and Berlin. Shaffer finds himself pulling soldiers off the battlefield while under fire, as well as documenting the new wonder drug, penicillin. His post-war civilian duties took him to Nuremberg and Tokyo on assignments related to Hitler’s bunker suicide and the atomic bombing of Japan.

Shaffer, retired after long careers at the Medical College of Virginia (now Virginia Commonwealth University) and the World Health Organization, has a folksy way of telling his story. Readers of Shaffer’s book will feel as though they are sitting across from him at the dinner table, but his tales are true and not tall ones. He says, “I tried to write the book in such a way that readers could experience the war as I did, that they could see and feel the power of things as they came to me and, occasionally, find the humor of it all.”

Now in his 90s, Melvin Shaffer still travels as much as he can and has never satisfied his wanderlust. He is writing a sequel to From Anderson’s Holler, covering his post-war experiences in medical education.

Posted by Mike Rhode at 9:34 AM No comments:

The Nay's medical department historian has been conducting oral histories for weeks to document the coronavirus response. This is the first piece to come out of that effort.

That's the former Armed Forces Institute of Pathology collection with many pre-World War II Army Medical Museum specimens.
As of 2011, they were scanning patient records and creating metadata, but then the AFIP was BRAC'd and recreated as the JPC. How does one digitize wax tissue blocks? Or wet tissue?
Posted by Mike Rhode at 9:28 AM 1 comment: