Putting a face on it 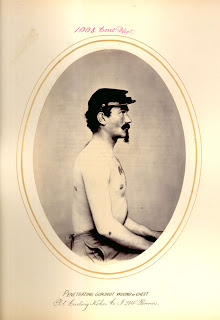 I'm reviewing the first batch of Contributed Photographs to be uploaded to our database, and have started coming across photos of soldiers injured at Antietam and Gettysburg. It's not often we can put faces to the statistics of this war, but here's one example of a soldier injured at Gettysburg. This is what the record says:

Ludwig Kohn, private, Co. I, 214th Pa. Vols., aged 26, admitted to Harewood U.S.A. General Hospital, August 15, 1865, suffering from gunshot wound of chest, right side, ball fracturing third rib, transfixing chest, exit below scapulae same side. Wounded July 1, 1863, at the battle of Gettysburg, Pa. On admission to this Hospital, the parts had nearly healed; but patient states that the wound soon after the injury became gangrenous with considerable sloughing of soft parts; spit blood at time, and that the wound was so painful as to deprive him of his night’s rest; could not lie on his back, but was obliged to sit up day and night. There is still a slight fistulous opening, but otherwise parts entirely healed; is in very good constitutional state, and is now awaiting his discharge from U.S. service.

Contributed by R.B. Bontecou
Posted by cruisingat60 at 10:55 AM