Øystein Horgmo has written an interesting blog post about pictures from the Museum at "Mirror of the Body": http://sterileeye.com/2011/02/08/mirror-of-the-body/

Until he asked about these types of photographs, my eye had glided over them.

Posted by Mike Rhode at 2:19 PM No comments: Links to this post

Letter of the Day: October 31

I think I must be indebted to your consideration + kindness for a portfolio of 30 large illustrations, photographed at the Army Medical Museum at Washington, which I received a short time since by railway from Liverpool. The parcel did not contain a letter, + the cover simply bore the words “courtesy of Dr. Haight,’ to whom, no address being given, I have been unable to write my acknowledgements of its safe receipt. I have been greatly interested in the drawings – many of them illustrate cases of great scientific value as well as of great credit to the operator, while all of them are of subjects calculated to be useful as affording material for thought + instruction on military injuries. Your Museum must indeed be rich in specimens of the effects of gunshot wounds, judging from the examples photographed in the collection of drawings I have received. I thank you very sincerely for giving me the opportunity of seeing those which are now in my possession, + I feel that the profession at large in Europe is indebted to you for giving to it the means of studying some portions of your museum at Washington, by such photographs, notwithstanding the distance which divides us from it.

I take the opportunity by this communication of transmitting to you a report on the effect on health of the present system in England, + elsewhere in Europe, of carrying the knapsack, kit, and accoutrements by soldiers. The report, though printed, is not published, - a certain number of copies only being circulated among those who have been engaged in or connected with the enquiries to which the report refers. I should feel obliged if no public use of the report is made. I mean reference in public prints. I send it on account fo the importance of the questions involved, + in the belief that the questions are of such a nature that you will feel an interest in them. The recommendations of the Committee in p. 11 are to be carried out, + I hope that the trials may lead to much good.

I also enclose one or two reprints from the 5th Vol. of the Army Medical Reports. I hope you have also received the volume itself.

I am
Very faithfully yours
Tho. Longmore
Posted by Mike Rhode at 1:10 AM No comments: Links to this post

Here's the photographs and printed history that Ward referred to: 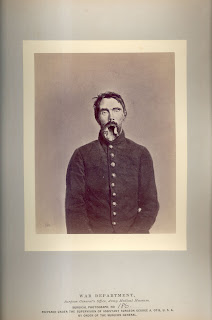 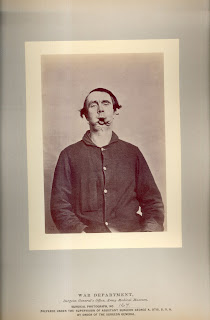 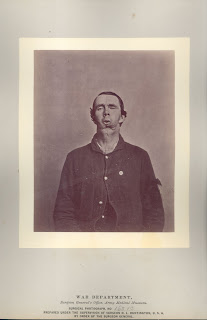 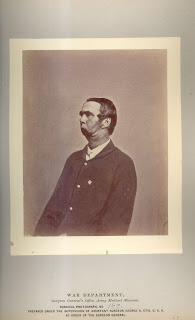 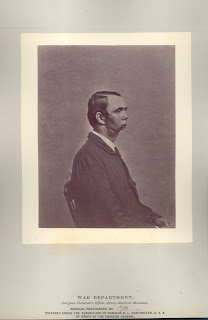 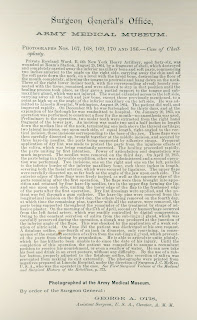 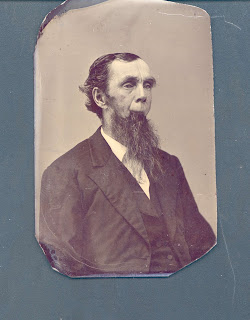 I saw one of these pictures referenced in a paper on Civil War wounded (more about that paper anon). They are linked from a nice little page on enlisted soldiers in the Civil War, which I thought was an excellent finding aid. 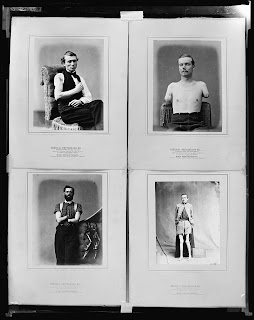 The top photograph, is a copy photo of four of our Surgical Photographs. The Library isn't quite sure who is in the picture, so I sent them this information via their Ask a Librarian interface:

Warden, Sergeant. - upper right. (Surgical Photograph 207) - this may have been a fake name. He was found on the streets of Washington and came to the Museum for a photograph, but they never found a record of him. 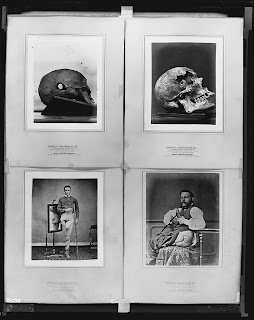 The other skull is anonymous.

We've actually scanned all 400 of these images at 900 dpi - we just haven't figured out how to put them on the web for everyone yet.
Posted by Mike Rhode at 5:54 PM 1 comment: Links to this post

Civil War photos from Museum on display in Smithsonian

Toby Jurovics, a curator of photography at the Smithsonian American Art Museum, borrowed some William Bell pictures from us last year. Bell's work is often confused with the more famous Matthew Brady. They're on display in a small gallery of Civil War photos, along with more famous pictures by Gardener and Sullivan.

Here's roughly how they look although I should have turned the flash off: Posted by Mike Rhode at 7:21 AM No comments: Links to this post "Penetrating gunshot would of the thorax and abdomen. A round musket ball having entered the left pleural cavity, passed through the diaphragm, and thence into some part of the intestinal canal. Recovery." Capt. Robert Stolpe, Co. A, 29th New York, wounded at battle of Chancellorsville, May 2, 1863. Artwork by E. Stauch. The operation of a new litter designed to be attached to Bell helicopters used in air evacuation of the wounded from the front lines. The litter was designed by Captain Sebourn. [Transport of sick and wounded. Evacuations. Aircraft.] Korean War. "This is no horror picture for these are Good Japs, sinister minions of Tojo who were caught in a murderous cross fire of machine guns and rifle bullets as they attempted to make one last [fanatical] break through [our] lines at Tanapag Harbor, Saipan Island, on July 7th. This picture will supply the warlords of Japan a rough idea of what lies ahead and serve to remind them that the road to Tokyo is becoming a pretty un-healthy place for Tojo-san and his warriors." W-CPA-44-6755 July Laudansky. World War 2. 10/1/1944.

See a discussion of this picture and caption.
Posted by Mike Rhode at 12:39 PM No comments: Links to this post

A Civil War plastic surgery article I helped on

I just ran across this - "The first civil war photographs of soldiers with facial wounds," Journal of Aesthetic Plastic Surgery, Springer New York, ISSN 0364-216X (Print) 1432-5241 (Online), Volume 19, Number 3 / May, 1995. This was largely written by my late friend Dr. Blair Rogers, although I can still pick out the parts I wrote - mostly the photo history. They've even put up the full text as a pdf that can be downloaded. Blair really pushed me into writing about the Civil War photographs, and I appreciate his efforts (perhaps more now than I did in the early 1990s.)
Posted by Mike Rhode at 6:13 PM No comments: Links to this post