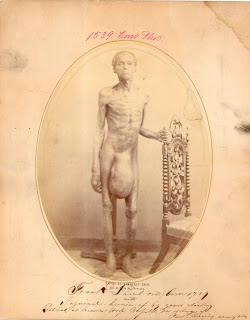 I have the honor to transmit herewith Photograph of “Frank Lamb” born at Weldens Orchard near Halifax North Carolina, in the year 1789.

It’s a case of “Inguinal hernia” of 69 years standing. The man was 9 years of age when hernia occurred. The hernia was reducible until he was 40 years of age, when sold to a man, named “Baine Lamb” at or near Jerusalem S. Hampton Co. Va: for the sum of $150.00. The overseer of said man compelled the poor man to work in the woods, cutting and hauling heavy timber, without giving him the support of truss, after his own was worn out. The hernia had its present size about 10 years ago, and I should judge weighs about 10 pounds.

Frank Lamb was send (sic) from Jerusalem to Hospital for Freedmen at this City on the 17th July 1867. Has up to this date, not regarding the continued irritation upon his bowels, enjoyed fair health. The Photograph is not very well taken, the artist could not do better, as the patient trembled too much, and hoping it will nevertheless prove interesting.

I am Surgeon with profound respect, your most ob: ser’t
Ferdinand Lessing
AA Surg USA
In charge Hosp: for Freedman
Norfolk City Va.
Posted by Mike Rhode at 1:03 AM